You are here: Home / General contents / Olympic rowing: A sport that sparks interest

In this article we will talk about a water sport with centuries of history and a lot to offer to lovers of physical water activities: Olympic rowing. A sport with charm, at first glance simple to practise, but which requires a certain physical effort and synchronisation with other companions when practised in a group.

WE INVITE YOU TO ENJOY A DAY OF OLYMPIC ROWING

A boat with specific dimensions, oars, technique, concentration and energy is all you need to practise a sport that does not require a great deal of previous training. Olympic rowing can be practised individually or in a group, always ready to give the best of our body and mind to obtain optimum results..

Let your senses guide you on the aquatic route, which will be driven by oars and the strength of your muscles. Being the fastest should be the rower’s main objective, but enjoying every stroke on the water, counteracting resistance, always touches your heartstrings.

The beaches of Mallorca are an excellent place to practice Olympic rowing, taking into account the tranquillity of its waters and the enclaves in which they are located, capable of awakening the most pleasurable sensations.

Don’t think twice about it! Go sailing in Mallorca and you’ll feel free on the water!.

THE ORIGINS OF ROWING

It is well known that this sport gets its name from the equipment used to move the boat: the oar.

The Egyptians were already showing off their rowing skills in order to become part of the Pharaoh’s funeral escort. From ancient Egypt to today’s regattas, the sport has undergone significant changes, always linked to the professional sphere.

The United Kingdom is the place of reference for rowing in its origins. First, in 1715, a boatmen’s race was organised on the Thames in London, and then, at the beginning of the 19th century, Oxford and Cambridge competed against each other in a regatta.

In 1892, members of rowing associations met in Turin to create the International Federation of Rowing Societies. Finally, the sport was included in the Olympic Games in Paris in 1900 for the men’s competition and 1976 for the women’s competition. 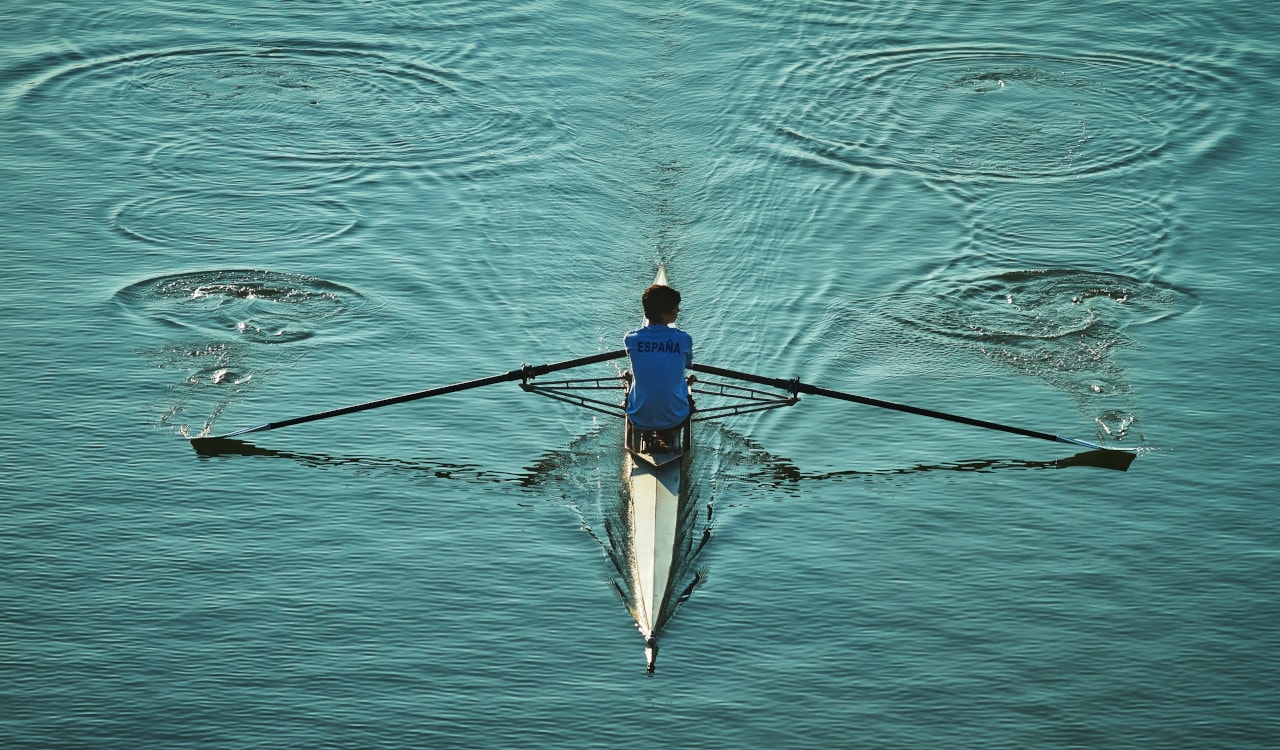 WHAT IS OLYMPIC ROWING?

Olympic rowing is a water sport mainly focused on competition, which, as we have said, can be practised on the beaches of Mallorca. However, we can also practice this sport for leisure, which is a unique moment for our body and our senses.

All Olympic competitions are held in calm waters and over a distance of 2,000 metres, depending on the category.

Olympic rowing consists of moving through calm waters, as we have already mentioned, for which the beaches of Mallorca are an ideal place. Athletes will use an elongated boat of the categories mentioned below, with a capacity for one or more rowers, who will be positioned with their backs to the bow. This is the front part of the boat, i.e. the individuals are positioned in the direction of movement.

The boat moves using the force and movement of the rower’s body, applied to the oars. Thus the movement of the oars becomes momentum. Of course, it is important to keep the rhythm so as not to lose speed in the displacement and lose the strength used.

Whoever ventures into Olympic rowing on the beaches of Mallorca must bear in mind that maintaining balance is key in this sport. For this, concentration plays an important role.

Olympic rowing on a movable bench is a very complete sport, as it activates a large part of our muscles and bones. Upper and lower body are synchronised to propel the boat.

WHAT DOES THE STROKE CONSIST OF?

Now let’s talk about the paddling. That is, the use of the paddles with which we row. There are four phases to this action, which are called the attack, pass, exit and recovery.

The movement begins when the paddle enters the water, moves perpendicular to the waterline and ends when it leaves the water. The paddle travels through the air in a horizontal position and finally returns to its original position before restarting the cycle. It is estimated that the rower on the last leg of a race course gives approximately 40 strokes per minute. 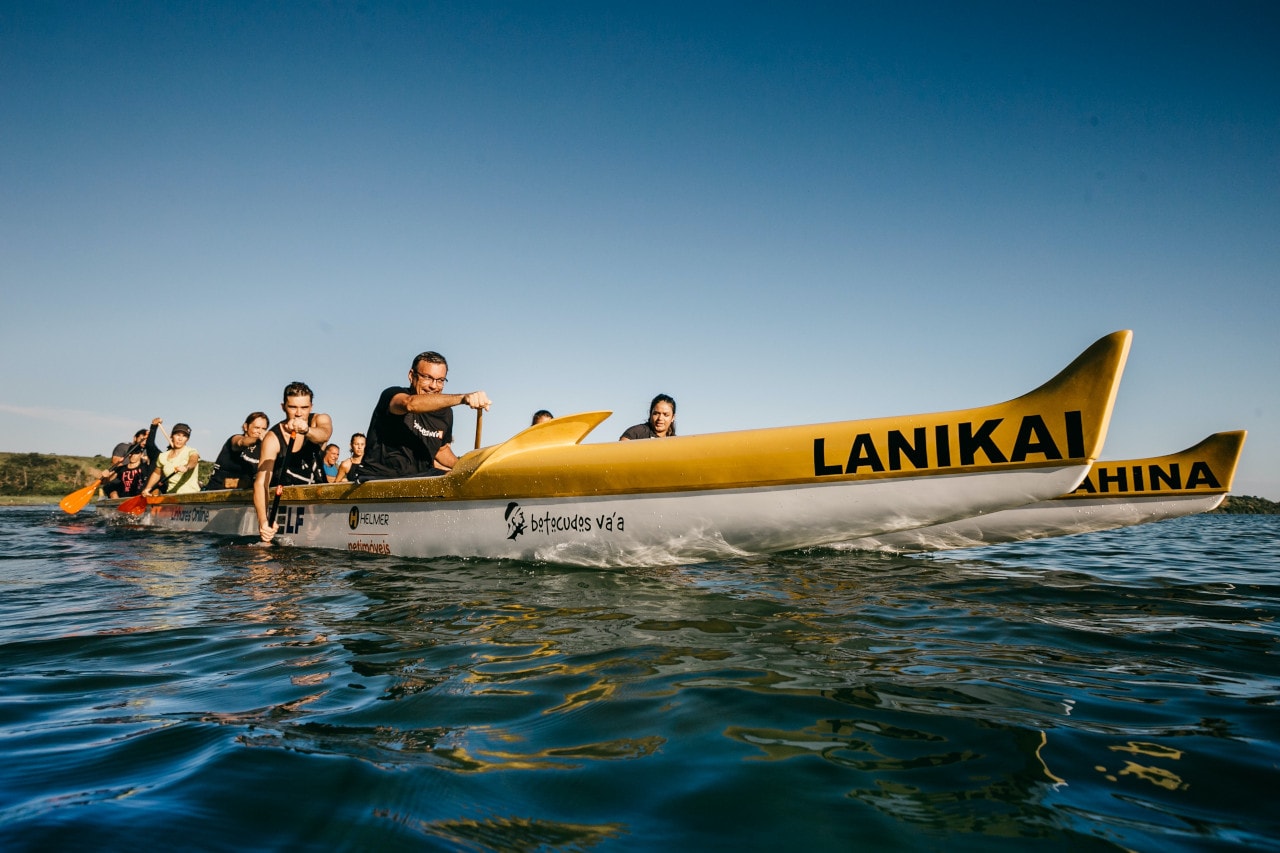 The boats used in Olympic rowing are generically called outriggers. This term means that the outriggers where the oars are placed and exert their thrust are outside the boat.

First of all, let’s mention the parts of the boat used in Olympic rowing.

The material from which the boats are built must be taken into account. Boats are made of wood or various plastics and synthetic materials designed to achieve maximum speed.

It is important that they are resistant to stress and light in weight. All boats differ in terms of their type, although they all have common elements.

Also of interest are the different types of boats for Olympic rowing. The boats used in Olympic rowing depend on the number of oars used by the rower: one or two. There are two types of rowing boats.

Sculls are those in which each rower uses two oars. These oars are about 3 m long and weigh a little less than two kgs each. The variants in this type are:

These are boats in which each rower uses only one oar. These oars are long, measuring 3.75 and 3.85 m and weighing about 3 kg. In order to maintain the direction of the boat, the crew is usually in pairs and the oars are placed alternately to port and starboard.

The modalities for these boats may or may not involve the figure of the helmsman. The coxswain is a member of the crew who sits at the stern (back of the boat) and sets the pace for the other rowers. .

There are five variants for these boats:

All the disciplines presented are contested in the men’s and women’s categories.

Practising a sport such as Olympic rowing is always stimulating, when the waters we row on take us to a bucolic world that awakens our senses, among which we highly recommend the waters of Mallorca! Moreover, Olympic rowing is one of those water sports that can be practised both in winter and summer.

Revitalising our body and activating our emotions are objectives achieved if we decide to get on one of those boats. Sharing a boat with other paddlers is also a great satisfaction for doing shared work and going in unison with other people.

Don’t be the last one to enjoy the beaches of Mallorca in an Olympic rowing boat!