You are here: Home / General contents / IN MALLORCA KITE FOIL AND WINDSURF FOIL!!!

To begin with, we are going to introduce this new navigation module by explaining why “foiling” has exploded into the world of sailing, the equipment and ideal practice conditions. In years 2008 and 2009 many speed records were broken by catamarans using foil wings, instead of the more conventional centre boards.

Then in 2012 and 2013 tests were run using various sailing equipment from the American Cup on the basis that from 2015-2016 this famous competition world use catamaran with foils.

Going back in time we can see that the Hobbie Cat brand used a model trimaran in the 90’s and that they had already begin navegating with foils.

The foil which is fixed below the craft enables the craft to be lifted in order to gain speed, preventing the board or vessel tubbing against the surface of the water and gaining great speed with minimal wind, making it easier to double the speed with the wind pushing the “foil” navigation. Another fundamental characteristic of the foil is you are able to achieve navigating tight angles with the wind, which are unthinkable with conventional equipment.

This method has become so popular that it will be the latest craze for the oncoming months if not years. The craze for foil has led to including existing surf and sup board to surf the waves using them.

ONLY FOR ADVANCED NAVIGATORS

It´s important to know that this is a very high level piece of equipment and should only be used by those navigators with a high level of experience and discipline with the conventional modules. Under no circumstances must you be a beginner to try this method, as it could put the person and his or her equipment at risk.

At all times it is important to take precaution and wear a life jacket and wetsuit to learn and of course be guided by a professional or instructor.

This modality, which is becoming very popular at present, is being marketed to such an extent that it is inevitable that it will be the attraction and novelty of the coming months and even years.

The more attainable and recommended foils for beginning are those of aluminum, and for higher levels and regattas those using carbon although these are more expensive.

Another reason why foil is a method of the future are due to its performance in navigation, you don’t require as much as wind as the more conventional boards, in other words , in the days where there is not enough wind to sail with a foil you can. For example in Kitesurf we are able to use much smaller kites than the normal ones used, and with winds up to 6-8 knocks we are able to fly; with windsurf, we can go from using sails of 7 to 8 meters square to a smaller 5 meters and achieving greater speeds.

We can now confirm that using this future piece of equipment, the “Foil” is the best option for navigating in slow and soft winds. Therefore places like Mallorca and its bays are the perfect spots to practise this technique ; with the constant thermal winds from May until October, Mallorca is the perfect destination for “ foiling”. Daily winds of between 10 and 16 knots from midday until the evening provides the ideal conditions to exploit all performances of this style of navigation.

Introducing this season 2018 here at Watersportsmallorca , Kite Foil and Windsurf Foil. Offering beginners classes and advance classes using the latest up to date equipment, private classes out in deep waters. Here in the bay of Alcudia we can offer you the best conditions to learn, wide open spaces in which to sail, only 2-3 hours plane ride from any main european capital.

Playa de Muro awaits you, join us for an adventure you will never forget!!! 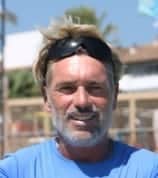 What is Psicobloc? It consists of climbing on the

If you want to experience navigating in a Catamara

With its wonderful weather Mallorca is a paradise

We are dedicated to the teaching and rental of Na

You never thought windsurfing could be so easy, he

The WATERSPORTSMALLORCA sailing school has its bas

Multiactivity in group, friends or family This ac