You are here: Home / General contents / L’EMBAT, a wind for everyone!!! 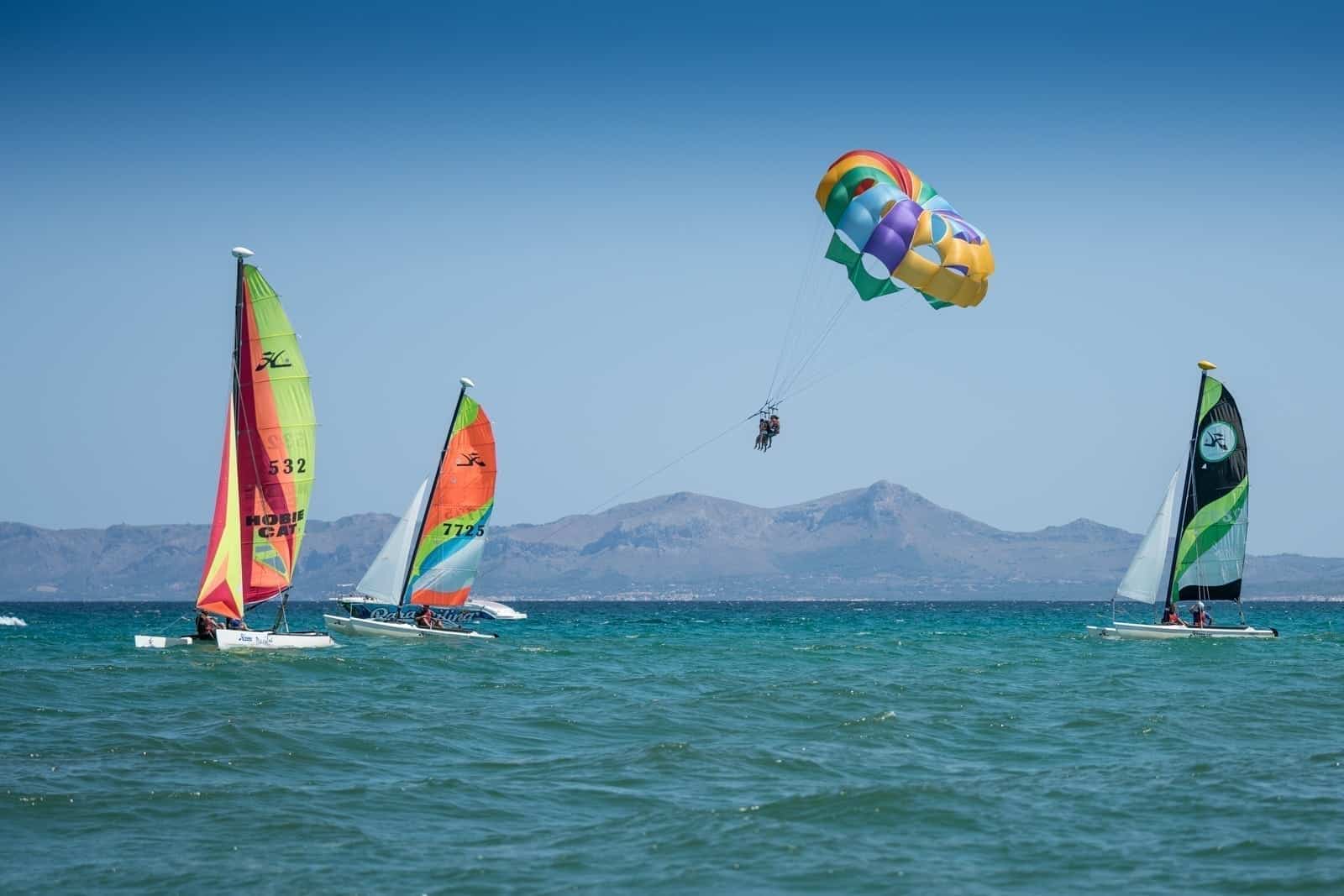 “Embat” originates from Mallorca. It’s a thermal wind that blows in the summer months. Due to its peculiar characteristics, it´s ideal to practice sports such as sailing, windsurf and kitesurf. Also for those paragliding addicts. Alcudia offers the perfect setting, leaping from the Puig de Sant Marti. 🙂

How are thermal winds formed?

During the night and the early hours of the morning a gentle summer time wind blows due to the heat from the earth that has accumulated during the day meeting the contrasting temperatures of the sea. Once brought together these elements and the differences in temperatures provoke a wind from the sea that comes to land, a fresh breeze known here in Mallorca as “Embat”.

“ Embat” means literally “Azote”. Once this thermal wind reaches land it slowly warms up until it changes direction returning once again to the sea in a constant circle according to the hottest hours of the day.

Many factors favour these thermal winds. A portion of sea surrounds the land, here all the bays share this orographic element. Due to the vast plainlands with no mountains near, and nearby stagnant waters near to the coast like “ Las Albuferas” enables us to have perfect thermal winds.

Also having high pressure during days and weeks, here in the Iberian peninsula it is know as the potent anti-cyclone “Azores” which comes in the summer period for up to 3 to 4 months. Normally with the anti-cyclone there is an absence of clouds which permit the sun to rise land and sea temperatures. Observing this we can see how fragile this cycle is, because if a few clouds appear, immediately the thermal winds are affected sometimes being shortened or its strength of knots being halved in a question of minutes. Luckily Mallorca nearly always has clear days throughout the year and from April until October with the heat arriving our dear friend “Embat” arrives punctually on time to our beach.

WHERE DOES THE EMBAT BLOW?

On the island of Mallorca the “Embat” blows on the three bays: Pollença, Alcudia and Palma. These three bays are geographically more well known than others in the world of sailing.
Perhaps Palma mostly, due to it holding regattas here, but Pollença and Alcudia are more popular for navigators wanting to practice Windsurf, Kitesurf and Catamaran.

THE BAY OF PALMA

Situated in the south is the largest of the three, and is also the capital of the island. Here you can find some of the most famous and emblematic clubs who organize regattas such as: C.N.Arenal and R.C.N. Palma, during the easter week the “Trofeo Sofia” and the beginning of December. Another well know club is the C.N. San Antonio in the Can Pastilla beach. There are no mountains here and there is the Son San Joan airport between the C.N. Arenal and the Port of Palma. In this area of the bay in Palma you will find old mallorquian windmills, which in the older times took advantage of the wind to produce water, make flour, oil… taking the main road into the interior you’ll find the first mountains and soft hills 20 kms into the North from the interior.

THE BAY OF POLLENÇA

Is the furthest North of the three, and also the smallest. It is narrow and long and the cliffs are not so high. Formentor is at the tip of the North. There is a sandy stretch which a joins the two marina’s. The port of Pollença and Alcudia which are situated on each side. The sandy waters of this bay unlike other bays on the island are not too deep and are very clear, being able to see up to 15 or 20 meters deep.

One of the characteristics that favour the formation of thermal winds like the Bay of Palma too, is that the edges of these coastlines are all beach with no mountains. Perhaps more significantly is the Albufereta nature reserve, with its static waters vegetacion and fauna.

Although only small this nature reserve has a positive affect on the formation of the “ Embat”. In the bay you can find the R.C.N. in the port of Pollença, like many private sailing schools it follows the marina traditions and has hosted many European windsurfing and catamaran championships on a world wide level. Joined to the Playa de Muro in the bay of Alcudia it boasts one of the best areas to practice Kitesurfing and Windsurfing. At the side of Alcudia there is the Sa Marina beach, here there are hardly any swimmers (tourists) and where the wind is chanelled by the area of “La Victoria” and “Bonaire”, here navigators have claimed this area their own.

THE BAY OF ALCUDIA

Situated next to the previous and towards the NE, borders on the “ Cabo Pinar” and the “Cabo Farrutx”. It extends much further and is much bigger than the bay of Pollença but not as expansive as the one in Palma. The Port of Alcudia is a healthily populated port, and here you’ll find Playa de Muro, Can Picafort and Son Serra de Marina in the middle. In the extreme east the bay finishes after “ La Colonia de Sant Pere”.

The beaches from the Port of Alcudia to Can Picafort are some of the largest and most beautiful sandy beaches on this wonderful island. On this side of the coast there is a large plain that receives the “Embat”, moving upwards it generates a cycle of thermal wind. Also importantly the nature park S’ Albufera is much bigger than S’Albufereta of Pollença and with a larger quantity of static water. Perhaps it’s at this point, together with the nature park and the Playa de Muro that the thermal winds blow with more intensity and regularity than anywhere else on the Island.

Between the two bays there is the peak of the Sant Marti mountain, where you will regularly see paragliders and Delta wings flying making the most of the constant winds to fly and do pirouettes. There is a sailing school in the Port of Alcudia and our nautical sports centre “Watersportsmallorca” in the Playa de Muro, where you can practice Windsurf, Kitesurf, SUP, Catamaran and Surf. There are also nautical clubs such as C.N. Son Serra de Marina, C.N. Can Picafort and C.N. Colonia de Sant Pere.

Many beaches in the bay are also well-known for their waves and surf, that arrive to the sea from the “Tramuntana” in Menorca and “ La Costa Brava”.

WHEN THE EMBAT BLOWS

During the winter it’s not hot enough to create thermal winds, they begin usually from the beginning of April. I have personally collected the following information below:

One year that stood out was the year 2011 where we saw an exceptional September and October, having days where the Embat blew up to 15 knots, this is not typical and these hot weather conditions had not been seen over a hundred years.

FROM ONE BAY TO ANOTHER?

Bearing in mind that in the Northern hemisphere those beaches bearing south favour the more intense marinadas, here in Mallorca perhaps due to it’s micro climate this is not strictly the case. We cannot say that there is one particular bay with more systematic wind than another.

In Palma the wind can blow scarcely up to 10 knots, but at the same time in Playa de Muro it could blow up to 16 knots. Therefore if we have predominantly south bearing winds, the bays of Alcudia and Pollença will have gentle thermal winds that only blow in the morning, giving way to the Embat.

Is in the north of the Island there is an Easterly direction, the thermal winds in the bay of Alcudia will roll strongly, meanwhile be unexistent in the bay of Pollença. From 9h the breeze will make the sea as still as a mirror.

At moments we will see on the horizon a dark line appearing, that is the Embat. It will start approaching the coast, finally covering the bay with a clear marine blue.

Bearing in mind that in the Northern hemisphere those beaches bearing south favour the more intense marinadas, here in Mallorca perhaps due to it’s micro climate this is not strictly the case.

We cannot say that there is one particular bay with more systematic wind than another. In Palma the wind can blow scarcely up to 10 knots, but at the same time in Playa de Muro it could blow up to 16 knots.

Therefore if we have predominantly south bearing winds, the bays of Alcudia and Pollença will have gentle thermal winds that only blow in the morning, giving way to the Embat. Is in the north of the Island there is an Easterly direction, the thermal winds in the bay of Alcudia will roll strongly, meanwhile be unexistent in the bay of Pollença. From 9h the breeze will make the sea as still as a mirror.

At moments we will see on the horizon a dark line appearing, that is the Embat. It will start approaching the coast, finally covering the bay with a clear marine blue.

[su_note note_color=”#f9f9f9″ radius=”0″]My observations are the fruit of more than 20 years of experience working with Watersportsmallorca here in the bays of Pollença and Alcudia. All the information given about the bay of Palma is a result of great friendships with other navigators who have shared their information and passion, not only for sailing but for knowing what wind will blow today!![/su_note]