The Aquathlon is a resistance sport that[su_highlight background=”#ff9700″ color=”#ffffff”]combines two disciplines: swimming and athletics (or running)[/su_highlight]. This combination attracts more and more athletes to this sport, it is also a sport that can be practiced by people of all ages.

Its origins date back to the first half of the twentieth century in competitions organised by lifeguards on the beaches of the United States, they are still held to this day. Even in other countries with more tradition in this sport such as Australia, New Zealand and the United Kingdom, Aquathon is no less popular than the already known Triathlon.

The equipment that is needed is the same as for running and swimming separately, running shoes, a swimsuit, hat and good goggles for swimming in open waters. Aquathon is therefore cheaper to practice than Triathlon and than Spearfishing, since you need a bike for the latter and more equipment.

The race is normally broken down as follows: running on foot (2.5 km), swimming in open water (1 km) and running on foot (another 2.5 km). It is ideal for athletes who want to test their limits in both disciplines. However, there are different modalities. If the water temperature is higher than 22 degrees in “sprint” mode, the distances just mentioned are usually applied (most common test in the Spanish Triathlon Federation). If the water temperature is below 22 degrees, we use a wetsuit and the distances are: 1km of swimming followed by 5km of running. For long races, 2 kms of swimming are followed by 10km of running.

2. How TO PREPARE FOR AN aQUATHLON cOMPETITION.

Before trying this sport, because it is a resistance sport, [su_highlight background=”#ff9700″ color=”#ffffff”]participants must prepare well to be able to reach the competition in a very good physical state [/su_highlight]. Despite the short distances, the sport is difficult because of its mixed disciplines.

To prepare for an event we must vary the workouts, go jogging and swimming on different days and rest the periods necessary for our body to recover.

The distances may vary according to what the organiser want : to make the competitions easier or more difficult for participants, for example: 1.5km running, 500m swimming and another 1.5km running (always the same distance running at the beginning at the end).

3. tIPS TO ENJOY YOU FIRST COMPETITION.

Although for some it is an unknown sport, the Triathlon that consists of swimming, cycling and running, has other versions such as the Aquathlon.

For those who want to start in this field, this simpler versions, ie aquathon, duathlons and the sprint version of triathlons, are very interesting to use as an introduction. But first it is necessary to take into account some tips: 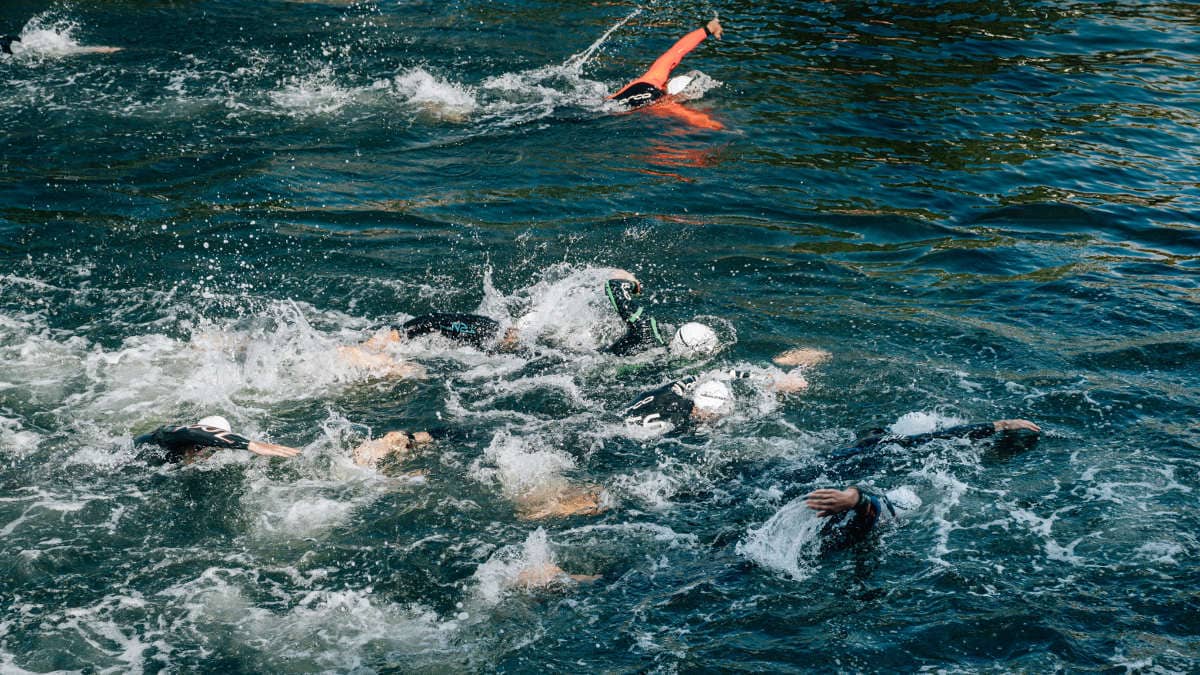 4. Swimrun and aquathlon an explosive combination.

Of all mammals, we humans are probably the ones with the greatest capacity to run and swim long distances, because thanks to our long life on land and our long-distance skills (which led our ancestors to be persistence hunters) for us running is not a problem. We can also take advantage of these innate long-distance qualities to improve swimming techniques to move through the water efficiently.

In recent years, the rise of the Triathlon has caused the other combinations to grow very strong, and Aquathon and Swimrun are now fashionable all across Europe.

As for Swimrun it is a sport that is practiced in pairs alternating swimming routes (in open waters) and on foot (by paths or tracks) in natural environments. A fundamental characteristic that differentiates it from the Aquathlon is that there are no transitions between running and swimming, which gives it great dynamism and a dose of savagery. Without an agreed distance you have to adapt to the place where the race is performed, which is key to this aquatic sport.

The equipment used for this sport is the same as for the Aquathlon, but in addition you have to carry a chip and a whistle in case there is an accident. You also need a wet suit and an elastic or rope of 10 metres maximum to keep the two people together in the water.

The distances usually range between 10km and 30km. The sum of the swimming sections usually represents 25% of the total distance of the race, but since the swimming speed is slower than the running one, in the end the times dedicated to both disciplines almost match.

In both sports companionship and nature make them great sports.

YOU DECIDE, AQUATHON OR SWIMRUN, IN BOTH CASES COMBINING RUNNING AND SWIMMING IN COMPETITION WILL HOOK YOU. DO YOU DARE TO TRY THEM?